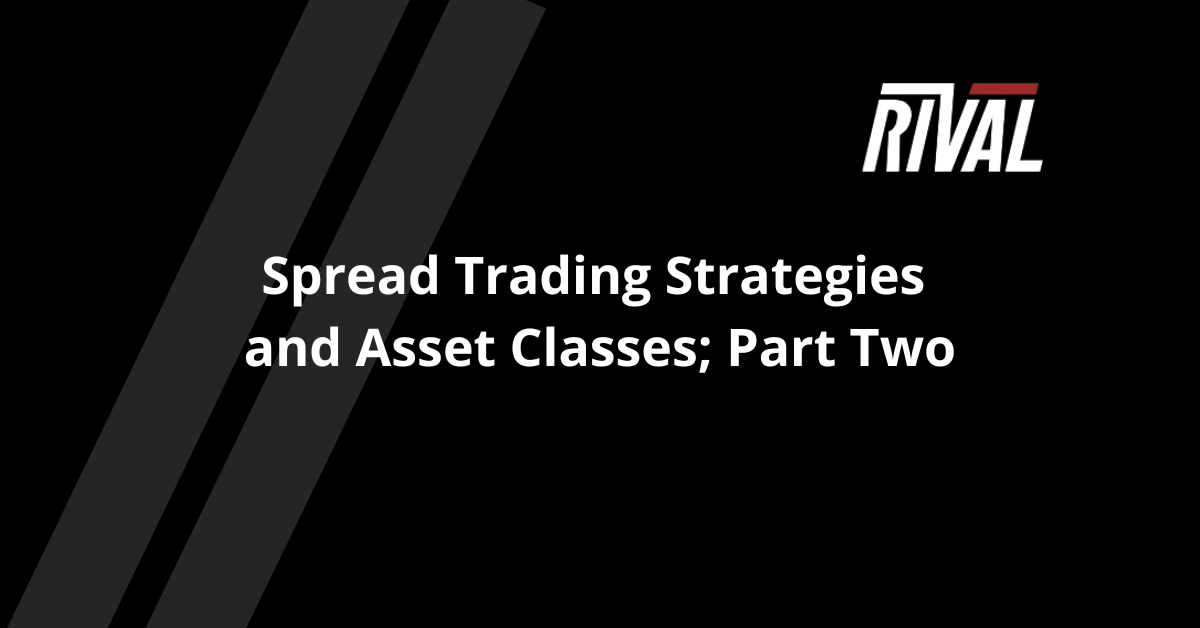 In an earlier post, we discussed spread trading strategies. Our examples in that post chiefly involved spreads that operate within a single asset class: for example, we spoke of options on the same underlying asset with different strike prices. Since price is generally used as the “y” axis in diagrams of their spreads, the higher strike price is above the lower one, and this sort of play draws a name from such a graphic. Hence, it is known as a vertical spread.

For context on what follows, consider that as 2022 began, Coinbase acquired FairX, a CFTC-regulated derivatives exchange. As a result, FairX, now known as the Coinbase Derivatives Exchange, launched the Nano Bitcoin futures contract. This is available to trade in Rival One.

Indeed, Rival One is the only platform that supports trading on Coinbase and the Coinbase Derivatives Exchange from a single front-end or API.

Under either name: In this spread trade, a party simultaneously purchases futures or options expiring on one date and sells the same instrument expiring on another. Each transaction is known as a “leg” of the spread. The two legs share the underlying market and strike price.

Now let us move on. The calendar trade, like the vertical trade, is a position that involves a single underlying asset. However, the wilder bestiary of spread trades involves different assets.

As an example of complementary goods, one would intuitively expect the value of ranch land and the livestock that graze there to rise or fall together.

Indeed, for assets such as pork or cattle the asset underlying the option isn’t the livestock itself but the futures contracts, so what someone trading options to execute a spread strategy on differing meat sources are looking for is the futures spread.

The bestiary can get a good deal wilder. Indeed, Rival One allows platform users to trade a spread like Bitcoin on Coinbase and E-mini S&P 500 futures on CME Group.

The S&P 500 is, of course, an index of the publicly traded stocks of 500 large companies. It is probably the single most influential index in the United States: Billions of dollars are invested in assets tied to its ups and downs.

Flexibility for the Trader

Why would one want to create a spread that involves both bitcoin and the e-Minis, presumably combining a long position on the one with a short position on the other? One might do so based on a thesis about the relationship between the two.

And it happens that the S&P and bitcoin are correlated at 0.59. This is a high degree of correlation, perhaps counter-intuitively so, but it is significantly lower than the S&P Nasdaq correlation (0.82), where perfect correlation is defined as 1.0

The values of the S&P minis are defined in U.S. dollars, of course. So, one aspect of this spread is a play of bitcoins against dollars. But of course, the dollar amounts are attached to equities.

Someone bullish on the publicly traded stocks of large corporations might buy futures on the index while selling futures on Bitcoin. If, as is likely (though far from certain), the two assets move in roughly the same direction during the contract’s life, the Bitcoin side of the bet will either muffle the losses or muffle the gains from the S&P side. As is true of many spreads, the muffling on the upside may be acceptable as a price for the security on the downside.

Some trades have only one trade. Some (the usual illustrations of a spread trade, including those we have been using so far) have two. Others are more elaborate.

Rival One, in the top echelon of tools, allows a trader to create a single transaction involving as many legs as desired. For example, if there are to be only two legs: one can involve a purchase and the other a sale. Or they can involve two purchases or two sales. All of this gives the trader much-desired flexibility in formulating a position.

Relatedly, the system allows for fractional quantities, so that a user can, for example, trade 1/10th of a bitcoin against ½ of an Ethereum.

Rival One is a platform with several advanced features, including an ultra-low latency engine.

Latency, in a trading system, is the period between an order and its execution: especially to the extent that span is due to the electronic features of a system, not human intervention. Ultra-low latency engines are simply systems that execute even higher volumes very quickly.

One key component of keeping latency low is co-location: the location of automated trading machinery only meters away from an exchange trading platform. In a trading environment

where some institutions consider a latency disadvantage of 0.0173 seconds (literally less than the blink of an eye) a disaster, Rival One is offering its traders what it calls a “customized latency profile” involving a “shared gateway or dedicated gateway on a server co-located at the exchange for optimal performance.”

Is Your Risk System Limiting Your Growth?